" A picture of many colors proclaims images of many thoughts ."  Donna Favors.   Think Chess!!!! 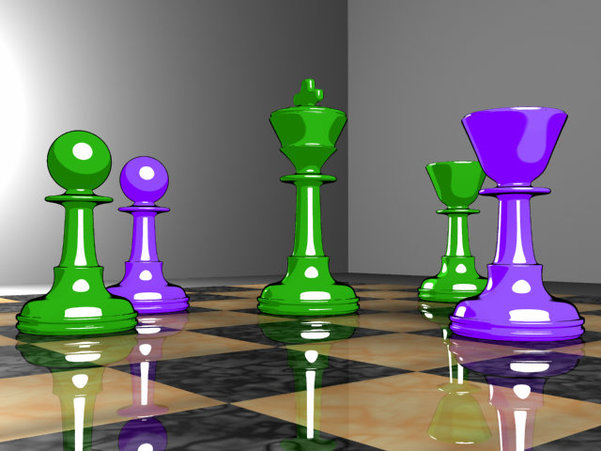 * This article was provided by chess.com

The Cognitive Psychology of chess

Dr. Fernand Gobet is a professor of Cognitive Psychology and an International Master.  He is a former Swiss Junior Champion and Swiss Champion, and was co-editor of the Swiss Chess Review from 1981 to 1989.  He wrote his Ph.D. dissertation on the memories of a chess player.  He has written many books and articles about chess and psychology.  He has been studying many aspects of chess psychology such as mental imagery, pattern recognition, and study and playing patterns of chess players.

After studying hundreds of chess players, Gobet has found a strong correlation between the number of hours chess players have dedicated to chess (deliberate practice) and their current rating.  In one study of 104 players (101 males and 3 females), including 39 untitled players without any rating, 39 untitled players with ratings , 13 FIDE masters (FM), 10 International Masters (IM), and 3 GMs, he found that the unrated players reported and average of 8,303 hours of dedication to chess; the rated but untitled players reported 11,715 hours; the FMs reported 19,618 hours and the IMs reported 27,929  hours (no information on GMs).   It took an average of 11,000 hours to reach 2200.  One player needed around 3,000 hours to reach 2200, while another player spent more than 23,000 hours to achieve the same level.

In Gobet’s survey, 83% of the players reported playing blitz, 80% had a coach at some point, 67% used databases (game databases, but not playing programs), 66% played against chess programs; 56% followed chess games without using a chessboard, 23% played blindfold games.  Stronger players were more likely to have a coach, use databases, and played blitz.

Dr. Gobet also found that group practice (including tournament games) was a better predictor of high-level performance than individual practice.

It has been shown that non-professional players who started playing chess at a young age, show interest and commitment to chess until the late teens.  This is when the amount of time devoted to chess peaks (about age 18).  After this, players start work or attend university and/or get married, which reduces the time spent playing chess.  By the mid-30s, when family and work issues are more stable, non-professional chess players return to the game and play more frequently.

One important role in chess skill is pattern recognition (vs. the ability to search through the problem space).  Through years of practice and study, masters have learnt several hundred thousands of perceptual chess patterns (called chunking).  When one of these patterns is recognized in a particular position, the master then has rapid access to information such as potential moves or move sequences, tactics, and strategies.  This explains automatic and intuitive discovery of good moves by a master, as well as extraordinary memory for game-like chess positions.

Search functions at a chess board, including the number of candidate moves visited and the depth of search, may not differ between masters and amateurs, according to De Groot (1946, 1978).  His findings were that Grandmasters do not search reliable deeper than amateurs.  However, other studies (Holding 1989) show that strong players really do search deeper than weaker players.  Holding argued that De Groot’s experiment wasn’t good enough to detect existing differences between Grandmasters and amateurs.

In 1990, Saariluoma studied the search function of top players and suggested the International Masters and Grandmasters sometimes search less than master chess players.  In tactical positions, he found that masters with a 2200 Elo rating looked at 52 nodes and at the largest depth of 5.1 moves.  By comparison, the IM and GM searched, on average, 23 nodes with an average depth of 3.6 moves.

Data from speed chess and simultaneous chess, show that limitations in thinking time do not impair chess master performance.  Chess masters seem to be more highly selective of their moves and direct their attention rapidly to good moves.  Grandmasters do not look at a lot of continuations of the game before choosing a move.  It seems that chunking, recognition of known chess patterns, plays a key role in a master’s ability to play fast and accurate.

So do strong players rely more on analyzing various alternatives, or do they rely on recognizing familiar chess patterns in the situation?  Do chess players put most of their emphasis on their analytic skills or on building up a huge knowledge base in their heads?  Perhaps it is a combination of search skills and pattern recognition.

In 1986, Gobet tried to replicate De Groot’s 1946 experiment of Grandmaster vs. amateur examination of chess positions.  Gobet was able to test four IMs, eight masters, and a total of 48 Swiss chess players on a series of chess quizzes in which the goal was to find the best move for White, without moving the pieces, with thinking time limited to 30 minutes

Gobet showed that another possible predictor of chess skill might be the starting age.  The average age at which players of each group started playing seriously was the following:  non-rated players – 18.6 years; rated players – 14.2 years; FMs – 11.6 years; IMs – 10.3 years; GMs (small sample) – 11.3 years.  Almost all the players with titles started playing seriously no later than age 12.

Becoming a master requires training activities that go beyond the type of repetitive and feedback-informed activities typically emphasized in earlier days.  Chess theory and computer technology has changed the ways chess players prepare for their games.  Masters try to memorize opening variations with the aid of chess databases, they investigate opening positions to find novelties to surprise their opponents, and they play tournament or training games against other players, or on the Internet, or against strong chess computer programs.

Dr. Gobet has also looked into the personalities of chess players.  Studies have found that adult chess players are more introverted and intuitive than the general population.  However, it is the more energetic and extraverted children that are more likely to play chess.  These children are, in general, more likely to try out activities such as chess than their less extraverted peers.  Children players who were stronger in chess than their peers were more curious, had broader intellectual and cultural interests, and were more accomplished in school than children who were weaker chess players.

In addition, stronger players also tend to me more intuitive than weaker ones.  Chess players also scored higher than non-players on the measures of orderliness and unconventional thinking.

Another consideration in chess thinking is the effect of ageing among chess players.  Studies have shown that in memory tasks where positions are briefly presented, for the same skill level, younger players recalled chess positions better than older players.  In spite of producing worse performance than younger players of the same skill level in memory tasks, older players performed equally well in problem solving tasks where they had to chose the best move, and that they were also faster at choosing their move.

In 1894, Alfred Binet carried out the first study on the mental abilities of chess masters.  In 1903, he was the first psychologist to develop an intelligence test.  He devised the Intelligence Quotent (IQ) tests, where the intelligence score was the quotient of mental age to physical age.

In 1927, three Russian psychologists (Djakow, Petrowski and Rudik) studied eight of the best grandmasters of the time.  The players included Emanuel Lasker, Richard Reti, Savielly Tartakower, Carlos Torre, Peter Romanovsky, Ernst Gurenfeld, and Rudolf Spielmann.  They did not find any differences with a control sample on general intelligence or visuo-spatial memory, with the exception of memory tasks where the material to be recalled was closely related to chess.

After a century of investigation, not a single study with adult chess players has managed to establish a link between chess skill and intelligence.  Intellect had little predictive power among strong chess players.